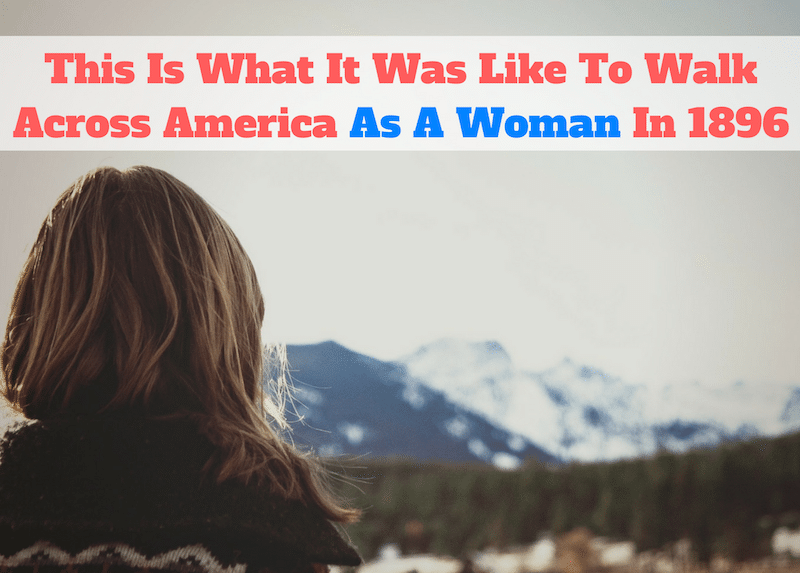 Can you imagine walking across America from Washington to New York on foot?

For me driving from NYC to Colorado was challenging enough; but walking?! Though with the proper gear to help you face the elements I guess it wouldn’t be excruciating.

Now picture walking across America in 1896.

As a woman in a dress.

With no change of clothes or smartphone.

Without support from your family and community.

With just $5 in your pocket.

This isn’t a scenario I just made up. It’s the true story of Helga Estby, a woman I recently discovered and became obsessed with. I finally have an answer to the question “If you could have dinner with anyone dead or alive who would it be?”

Helga Estby was a bad*ss, to put it bluntly. I thought it was tough going against societal norms to be a solo female travel blogger; but Helga embarked on an adventure I’d never dare do with proper equipment, let alone knowing I’d need to read a compass and sleep in wet clothes.

The exact details change slightly depending on what sources you look at, but the gist is that Helga was born in 1860 in Norway, moving to USA — Michigan to be exact — in 1871. By age 15 she became pregnant, which wouldn’t have been too big a deal if she’d married the father. Modern accounts are not sure who the father was, but they do say she married another Norwegian immigrant named Ole Estby, who was 28 to her 16, to avoid shame.

This was her first of about eight children, and the girl was named Clara. At the age of 18, it would be Clara who’d accompany her 36-year-old mother across the country. 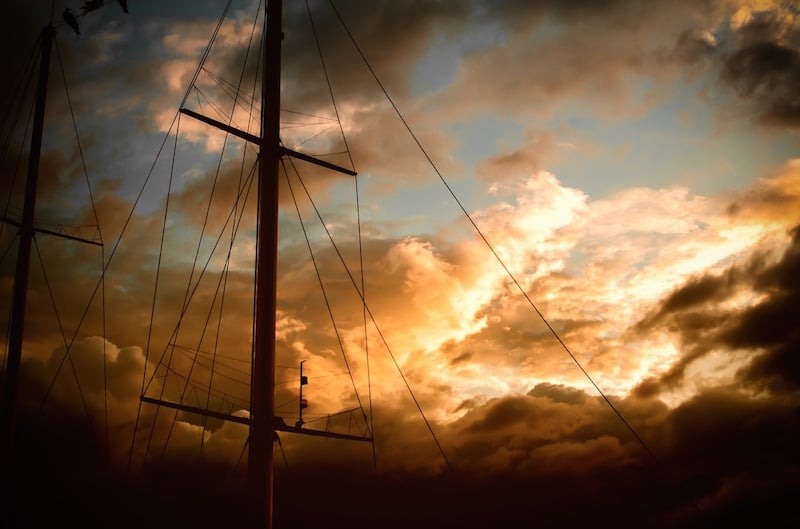 Helga came to the USA on a ship called Order in 1871 when she was 11 years old. Photo via Unsplash/Pixabay.

Life was not easy for the Estbys. They eventually moved to Minnesota and then Spokane, Washington. Helga lived a typical prairie life doting on her husband, sewing, churning butter, tending to the home and raising the family. By all accounts Helga found this quite stifling, especially as a feminist.

Helga and Ole dealt with illness and injury — she broke her pelvis falling into a poorly marked construction site at night, while Ole had a horse fall on him — as well a their home burning down. The Panic of 1893 brought a severe depression to the USA, and soon Helga and Ole couldn’t pay their bills. 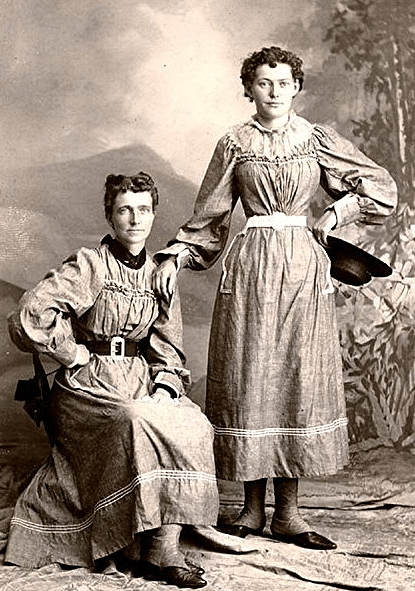 The Answer: Walking Across America

Helga found out about a challenge offering $10,000 to any woman who could walk across America in seven months or less, leaving home with just $5 in her pocket. They also required the wearing of a bicycle skirt, a new “risqué” fashion that showed the ankles.

Because of this requirement I’d believe the giveaway sponsor was a fashion rep, though I’ve also seen accounts it was the Women Globe Trotters.

Not only would the money save the family, but as a suffragist and feminist Helga felt she’d be able to prove a point. The community and her family had many reservations about her “deserting her home,” but she’d show them.

The duo left on May 5, 1896. To make ends meet along the way Helga and Clara did odd jobs like cooking and cleaning homes. They also sold photographs of themselves, as they were becoming well known on their journey. In many cities they would meet with local reporters (Helga was business savvy too!). She also kept a journal, intending to one day write a book about the trip.

Troubles & Triumphs On The Road

Helga was also smart enough to bring a gun — a Pepper Box Pistol, named for its resemblance to an old pepper grinder, to be exact. For an idea of the dangers Helga and Clara faced, there came a time along the journey when a persistent vagabond followed the women, even lunging at them at one point. Helga realized it was either him or them, and shot him in the leg.

Again, I think about the problems woman have traveling alone today — which is why I make it such a point to talk about travel safety often. Back then two women hiking alone would have seemed like extremely easy, “fragile” targets (though obviously these women were anything but!).

What’s interesting is the amount of kindness the women received. Most nights along their journey locals offered them places to stay. This reminds me of my journeys today. Because of constant frightening news stories, family and friends often envision me throwing myself to the wolves when traveling solo; however, the truth is majority of people you meet on the road are extremely warmhearted. Of course, the positive stories aren’t sensational enough to make Facebook’s trending stories or front page news. 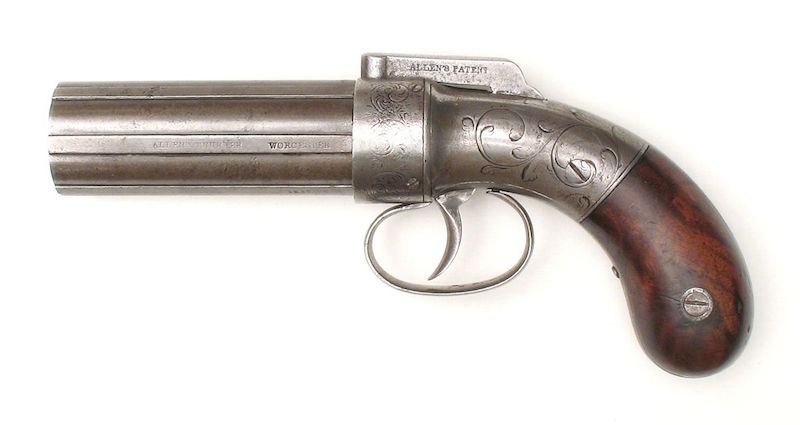 Victorian Pepper Box Pistol, similar to what Helga and Clara would have carried on their walk across America. Photo via Hatchetfish/Wikimedia Commons.

Despite the obstacles, Helga and Clara made it to NYC on December 23…19 days past the seven-month deadline. Clara had sprained her ankle along the way. Despite Helga writing the sponsor to request extra time and bringing lots of press to the challenge, she wasn’t given the $10,000. Not only that, but she wasn’t given the promised train ticket home.

The story gets more frustrating. Helga didn’t have enough money to get her and Clara back to Washington, and during her time away she lost two children to diphtheria. When she asked for assistance from the city of Brooklyn — Brooklyn was a city at the time — they merely told her it wasn’t in their budget; however, she could become a pauper of the state to gain assistance, which would take some time. 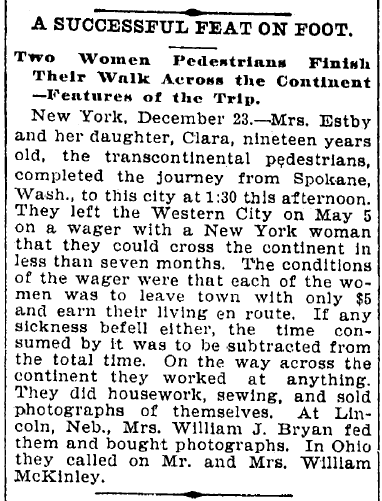 Clipping from the “Cleveland Leader”

Eventually a railroad titan provided the ladies passes to get back home. In the end, Helga and Clara were gone for over a year. Upon Helga’s return she wasn’t greeted with cake, balloons or applause; but disdain. She was seen as a deserter.

Helga’s walk across America is never really talked about again, and after her death her journals and scrapbooks are burned by her resentful children. Luckily, a daughter-in-law secretly kept a few scrapbook pages about the journey, and in 1984 one of Helga’s descendants, Douglas Bahr, wrote an essay titled “Grandma Walks from Coast to Coast” in a contest. This caught the attention of author Linda Lawrence Hunt, who when on to write “Bold Spirit: Helga Estby’s Forgotten Walk Across Victorian America,” which I suggest you all read (like, tomorrow!).

While Helga’s story is filled with sadness, there is a (very bright) silver lining. The narrative is so much more than just an adventure trek. It’s unbelievable and completely plausible all at the same time. It’s the epitome of inspiring. Hell, a woman today would turn heads for doing such a trip. But 1896?! Wow. 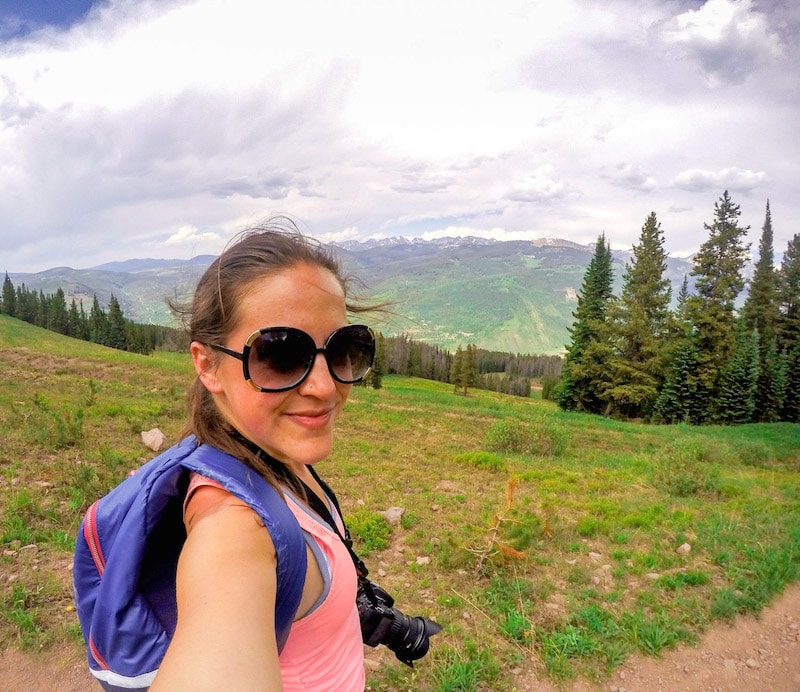 Thank you Helga, for the paving the way for solo female travelers like me! Here I am hiking solo at Vail Mountain in Colorado.

Helga was a pioneer for solo travelers and adventurous women. She pushed the boundaries of what people thought women were capable of and proved society wrong for the greater good of females. She’s a motivation to anyone who has ever doubted they could accomplish something that seemed illogical, improbable or impossible.

What do you think about Helga and Clara’s walk across America? Please share your reactions in the comments below!

Women of Courage: Inspiring Stories from the Women Who Lived Them [Great Reads]

*Originally published on September 6, 2016, and re-published in honor of Women’s History Month 2020.