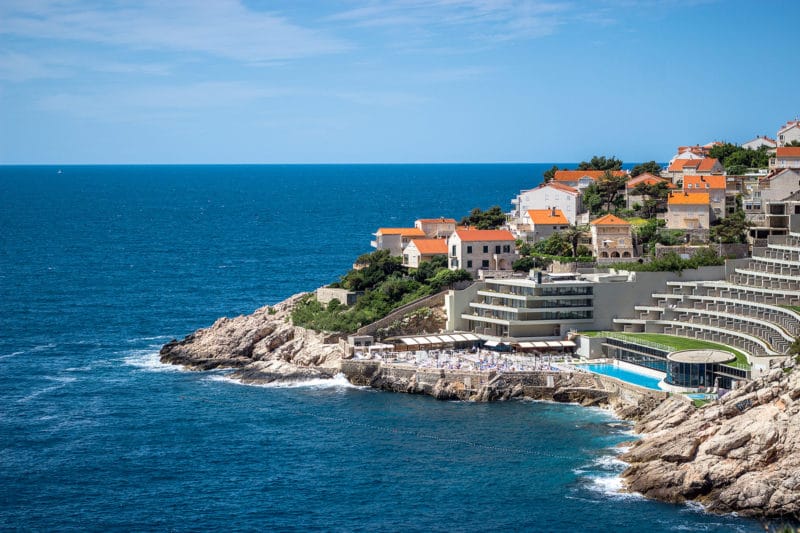 Don’t miss these essential travel tips to know before you go!

Feel free to also add your own advice in the comments below.

Along with having a designated backpacker circuit, there are tons of great hostels, the locals often understand English, and public transportation is reliable and easy to navigate.

As soon as I arrived in Zagreb — which, by the way, should be listed in every Croatia travel guide — I felt like I’d been there 1,000 times.

For example, when I landed I needed to get to Hostel Swanky Mint at the Frankopanska. I asked the airport information how to get there, and they instructed me to take the bus, which ran every 30 minutes and was 30 Kuna (~$4.30 USD) — to the main train station to pick up Tram 6 (10 Kuna/~$1.45).

Both the bus and tram were labeled, as were all the stops, so it was easy to find my hostel.

2. A Backpack Is Preferable Over A Suitcase

I traveled through Croatia with a small carry-on suitcase and was kicking myself for it for a few reasons.

For one, you get charged to leave your luggage in the underbelly of the bus, usually only $1-$2, but still.

The other more important reason was that along the major routes there were a few parks I would have liked to stop in and hike, but couldn’t with a suitcase.

For example, it would have been much easier to stop at Plitvice Lakes National Park on the way from Zagreb to Zadar; however, I was forced to go to Zadar, drop off my luggage, then head 90 minutes back in the direction of Zagreb to go to the lakes.

3. You Will Not Have A Problem With WiFi

The main square and most eating and drinking are outfitted with free WiFi, not to mention the city has one of the richest cafe cultures I’ve ever seen.

One thing I found baffling in Zagreb was the difference between a cafe or bar and a restaurant.

In Zagreb, it’s not uncommon for a bar or cafe to only serve drinks, due to a law that prohibits the sale of food in places where smoking is allowed.

Once a local explained this to me it became clear why so many of the venues I’d walked into had nothing edible to serve.

5. Do Not Refer To Croatia As Being In The Balkans

To many locals, this is an insult. The truth is, while geographically Croatia and the Balkans share similarities, their cultures are completely different.

My guide Alida from Blue Bike Zagreb explained that Croats feel much more kinship toward Central Europe, and Zagreb in particular feels closer to cities like Vienna and Budapest.

Another example can be seen with the term “Balkan Wars,” which Croatians call the “Homeland Wars.”

Obviously being affordable is relative — especially when visiting Europe —  but I think most Western travelers would find Croatia to be extremely affordable.

What tips would you add for traveling Croatia?

73 Unique Restaurants In NYC You Absolutely Must Try In Your Lifetime
Is There A Walmart In NYC? (Ultimate Guide)
Solo Travel In Ireland: The Ultimate Guide (With Map!)
Posted in Europe, Travel Guides

This website uses cookies to improve your experience while you navigate through the website. Out of these, the cookies that are categorized as necessary are stored on your browser as they are essential for the working of basic functionalities of the website. We also use third-party cookies that help us analyze and understand how you use this website. These cookies will be stored in your browser only with your consent. You also have the option to opt-out of these cookies. But opting out of some of these cookies may affect your browsing experience.
Necessary Always Enabled
Necessary cookies are absolutely essential for the website to function properly. These cookies ensure basic functionalities and security features of the website, anonymously.
Functional
Functional cookies help to perform certain functionalities like sharing the content of the website on social media platforms, collect feedbacks, and other third-party features.
Performance
Performance cookies are used to understand and analyze the key performance indexes of the website which helps in delivering a better user experience for the visitors.
Analytics
Analytical cookies are used to understand how visitors interact with the website. These cookies help provide information on metrics the number of visitors, bounce rate, traffic source, etc.
Advertisement
Advertisement cookies are used to provide visitors with relevant ads and marketing campaigns. These cookies track visitors across websites and collect information to provide customized ads.
Others
Other uncategorized cookies are those that are being analyzed and have not been classified into a category as yet.
SAVE & ACCEPT
208 shares