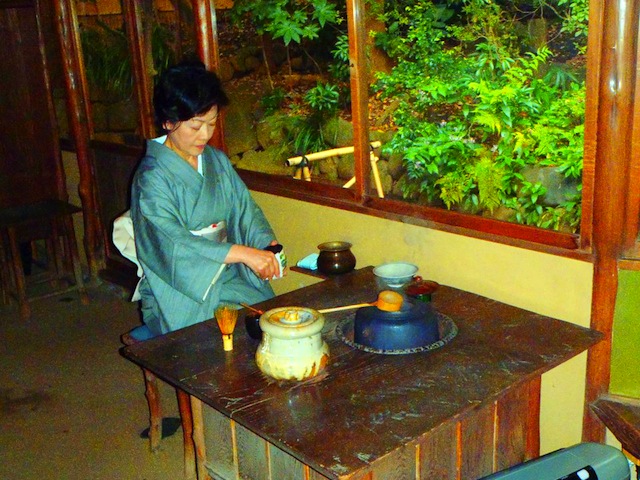 “It’s about welcoming the guest and showing them the beauty of making the tea.”

I’m in Tokyo at a traditional Japanese tea ceremony at Happo-En, meaning “Garden of Eight Views,” with Shinji Nohara, a local Tokyo guide. He’s translating for me as Minako, the Teishu, or woman leading the ceremony, is explaining the process.

The small wooden building has a cozy, rustic feel. Originally built in Yokohama, the house was eventually moved to Tokyo. Its beams are over 120 years old, helping to give an ambiance of heritage.

In the tea room, or chashitsu, there is one long table for five and two smaller tables. A simple stove sits against the wall on the right, while a beautiful Japanese woman dressed in a Kimono with her hair in a low chignon stands smiling in the center of the room.

Minako greets us and places two confectioneries, or kashi, on the table, one pink maple leaf flower made of sugar and the other a round white cake filled with azuki paste made from Japanese sugar cane. The two are very sweet, which is supposed to help alleviate the bitter taste of the Matcha, or green tea.

“The Japanese are very considerate of the different seasons,” explains Shinji. “If you look outside the foliage is changing. The maple leaf represents the current season, as does the painting on the wall.”

I glance up to see the bright pinks and oranges of the trees outside the window, and a painting on the wall with a similar depiction.

During a traditional tea ceremony — which should definitely be on your Japan itinerary — one of the most important focuses of the tea host is to make the guest feel welcome in accordance with the season.

While in winter visitors should be made to feel warm and cozy, summer guests should feel cool and light.

In fact, the Japanese tea ceremony isn’t really about drinking tea at all, but about the aesthetics that go into making it happen.

A girl named Peggy sits to my left, and since she is the first seated she is considered Shoukyaku, or the main guest. Since I am second I am the Jikyaku. Although we’re given separate titles, however, our treatment is the same. The concept of Japense tea ceremonies began from the Nara Period to the Heian Period (794 – 1192) when tea was rare and only really drank as medicine by priests and nobility. Because of this, rules and traditions began to form around the drinking of the tea. I learn there are three major tea schools – Urasenke, Omotesenke and Mushanokōjisenke – as well as 10 sub-schools. Minako is of the Sohen school of tea. It is clear she is very well trained, as she makes the process look like a work of art, another important focus for the Teishu.

Minako daintily picks up a handcrafted ceramic mug and gently washes and dries it.

“It’s important the only liquids that touch the cup are the tea and water,” explains Shinji. “It makes the cup more authentic and the tea taste better.”

Softly scooping up some fresh ground green tea leaves, Minako drops them slowly into the cup with a wooden spoon. The only sounds I hear are the leaves outside gently rustling, the pouring of liquids and the soft tapping of wood against the kettle. A bamboo whisk is used to mix the tea with water. It’s important the water is the perfect temperature – not too hot not too cold – or the tea won’t taste right. The perfect time to pour the water is just after it’s boiled and beginning to cool. This will give the tea the perfect taste.

The green tea served at Japanese tea ceremonies isn’t the bagged stuff most people are used to, but the highest quality green tea leaves you can find. This allows for the highest amount of possible health benefits as well as anti-aging and anti-oxidant properties. 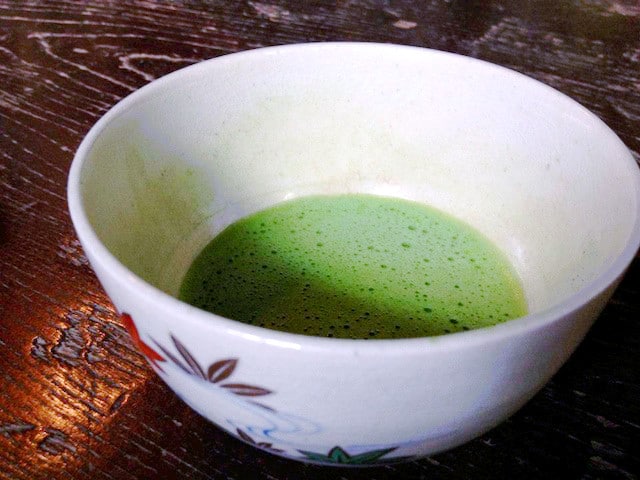 When the tea is placed in front of me, I’m instructed to place my right hand at the 3 o’clock mark and my left hand underneath. Because there is no handle, this is how to cradle the cup to drink its contents. From there, I’m told to admire the cup. There is a painting with blue spiral lines attached to colorful leaves and flowers. I appreciate the aesthetics of the picture, as well as the fact Minako has chosen this particular cup to represent the season.

Because I’m not supposed to put my mouth on the picture, I’m told to twist the cup 180 degrees to have the flowers facing out. I bring the cup slowly to my lips, tilt it slightly back and take a small sip. The fresh tea tastes bitter, although the sweetness from the previously eaten desserts helps to lighten this. I don’t know if it’s the cozy setting, the fact I can hear birds singing in the trees or that I’m in Japan having a truly traditional experience, but as I swallow the tea and exhale all my stress seems to leave my body. It’s a sense of calm that fits perfectly with the setting.

Once I’m done I slurp audibly so Minako knows I’m finished. Wiping the excess tea off the rim with my finger, I turn the cup back so the picture is facing me and admire it one last time. 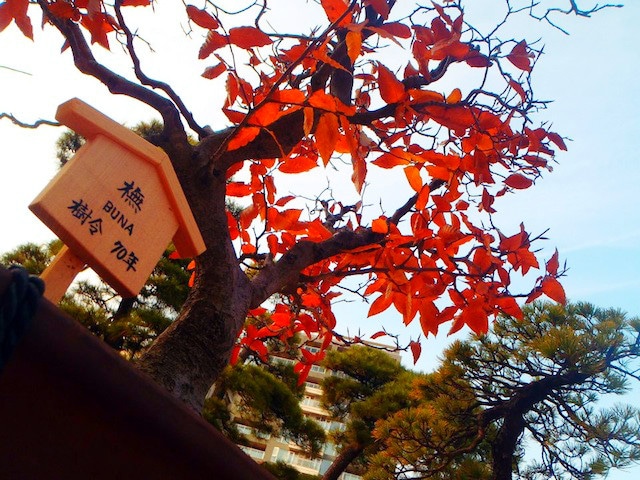 Outside in the traditional Japanese tea gardens there are 380-year-old bonsai trees. Their wise and ancient form reminds me of the ancient traditions of Japanese culture – like the tea ceremony – that make the culture so unique and powerful. It’s a beauty and a feeling best understood not through words, but experience. For me, this is the sipping of green tea among the vibrant foliage of a tranquil garden.

The Japanese tea ceremony, also called the Way of Tea, is an important celebration in the Japanese culture. If you ever visit Japan and stay in one of the hotels in Tokyo, make sure to participate in this ceremonial preparation it is worth the experience.

The tea ceremony at Happo-En costs 2,100 yen (about $26). If you’d like to explore this as well as other interesting experiences and sites in Tokyo, I recommend hiring Shinji, the Tokyo Fixer as a local guide. Not only is he extremely knowledgeable about the city, he’ll tailor the tour based on your interests. Click here for more information.

Solo Trip From Delhi: 10 Amazing Places To Visit Near Delhi Alone
Bali Solo Travel: How To Have An Amazing Trip When Visiting Bali Alone
13 Best Hiking Trails in Taiwan You Shouldn't Miss
Posted in Art and Culture, Asia