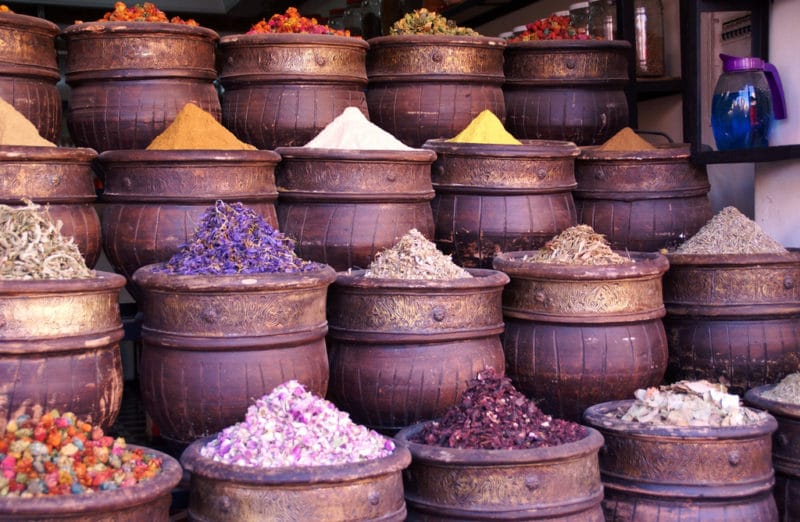 When visiting Morocco, you have the opportunity to learn about ancient remedies and Berber apothecary by visiting a Berber pharmacy.

The indigenous Berber people have been honing their herbal healing methods for centuries and even though modern medicine is widely available, Moroccans swear by these cures.

Many of the pharmacies located in the souks of cities such as Fez and Marrakech are run by families and the business is passed down through the generations.

The pharmacy stocks the herbs and spices above as well as items such as weight loss tea blends, saffron to increase blood flow and calm nerves, cumin to aid in digestion and even “herbal Viagra.”

To give you an idea of what to expect, here are some popular Berber remedies. Keep reading for the ultimate wellness tourism experience.

Cayenne pepper is effective in reducing fevers, fighting bacteria, and breaking down phlegm, all while improving the immune system. One remedy for a sore throat is to sip on a mixture of warm water and cayenne pepper. If phlegm is more of the issue, gargle and spit out the water mixture instead of swallowing. For those who need a little sweetness, season tea with lemon or honey and add a teaspoon of cayenne.

Nigella sativa, or black cumin seeds, are another popular Moroccan folk remedy. As an anti-inflammatory, these seeds stimulate the immune system by increasing the white blood cell count during infection to help fight unwanted pathogens. Moroccans will wrap the seeds in a thin cloth and after rubbing the seeds together, inhale six to eight times to clear sinuses, dissolve headaches and combat snoring. When powdered, the seeds can be mixed with honey and taken with a spoon.

To silence a cough, Moroccans will massage a mixture of Moroccan argan oil and olive oil onto the neck and wrap it with a scarf.

Green tea infused with fresh mint leaves is a popular drink in Morocco that cures sickness. This warm beverage soothes the throat while treating fever, nausea and indigestion. The combination of mint and green tea give the body extra antioxidants.

Medicinally, ginger is an anti-inflammatory that reduces phlegm, fights unwanted bacteria, enhances the immune system, reduces fever and relieves nausea. The oils from the root have soothing properties that ease digestion when the common cold makes it difficult to eat. Because some ginger can be spicy, ingesting it causes the body to warm, which helps against the beginnings of a cold and the chills.

Cumin is one of the most common spices used in Moroccan cooking and can be found in almost all types of tajines. Originally from India, cumin is easy to digest and has the ability to relieve pain and diarrhea. It is also known to be an appetite enhancer. Cumin is kept on most tables in Morocco, similar to how Americans keep salt and pepper readily available.

While saffron enhances any tajine and is used in some desserts and teas, it is also believed to increase appetite, aid digestion, calm nerves and increase blood flow. Saffron is indigenous to the town of Taliouine where local saffron cooperatives exist. Berber communities use the bright orange spice as a natural dye for clothes and carpets, in make-up and as a perfume for the body and hair. Luckily, a little bit of this spice goes a long way, as it is the most expensive spice on the market.

This article originally appeared on Gadling